Kicking Off 2015 with Food and Friendship

Posted on February 13, 2015 by ChicagoAikidoClub

As announced, class was taught by Joe Takehara and Yuki Hara, followed by a potluck luncheon held next door on the premises of the Japanese American Service Commitee (JASC). The spread included some great vegetarian stew, meatballs, Spam musubi, lumpia (Filipino eggrolls), and as has become a tradition, kringles courtesy of our friends from Wisconsin. 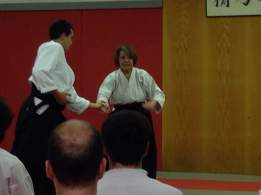