Posted on October 20, 2017 by ChicagoAikidoClub 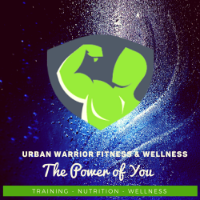 Chicago Aikido Club (CAC) will be partnering with Urban Warrior Fitness in Rogers Park to present two free Monday night introductory aikido workshops on October 30 and November 13. Both workshops will last 90 minutes and start at 7:00 pm.

The workshops will emphasize the use of aikido to develop mindfulness through movement, breathing and balance, as well the self-defense aspects of the art.

Both groups hope these workshops may be helpful to the local community, which is still dealing with the aftermath of a fatal shooting incident that took place on October 13.

Posted on October 15, 2017 by ChicagoAikidoClub

Erik Matsunaga, head instructor of Ravenswood Shorin-ryu Karate Dojo and who profiled Chicago Aikido Club (CAC) senior instructor Joe Takehara Sensei in Discover Nikkei recently shared this memorable photo and memory from 2013 with members of the two dojo getting together at a Japanese American community fundraiser at the Nisei Lounge bar in Wrigleyville.

At one time, Takehara sensei lived on Newport Avenue, a half block east of the Nisei Lounge. He opened his dental practice one block south on Clark, across the street from Tony Muranaka’s home, whose matless, marble-floored basement served as the original gathering place for the Illinois Aikido Club. Incidentally, Detective Muranaka was the first Nisei on the Chicago Police Department.

After moving out of Muranaka’s 3-flat basement, the IAC opened its first dedicated, storefront dojo with makeshift mats across the street from John Omori’s (co-founder of IAC) optometry practice.

And the Japanese American Service Committee, whose Uptown facility a mile-and-a-half up Clark Street currently hosts Takehara sensei and the Chicago Aikido Club, once triangulated these positions at its old location two blocks south of Nisei Lounge, on the corner of Sheffield and School.

I’d venture to guess Takehara sensei was the first Nisei his generation’s namesake tavern had seen in a long time, and quite possibly the only one since. For more information as to why that would be, peruse & listen to WBEZ’s recent Curious City feature: “What Happened to Chicago’s Japanese Neighborhood?”

The Orange Story Continues to be Told

Posted on October 15, 2017 by ChicagoAikidoClub 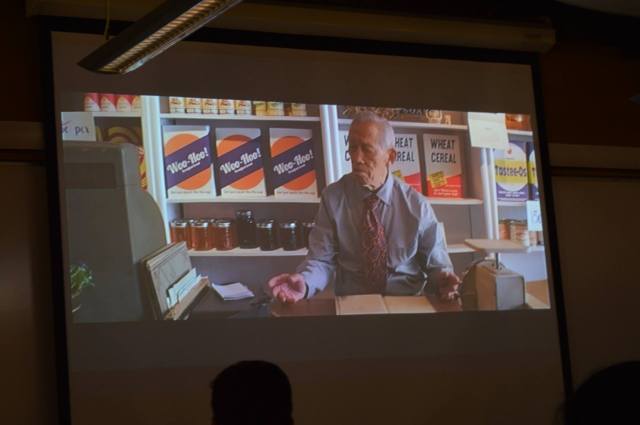 Although filmed more than a year ago and having premiered at the end of 2016, the short film The Orange Story starring Chicago Aikido Club (CAC) senior instructor Joe Takehara Sensei continues its journey to educate the public and a new generation about the World War II Japanese American internment.

In September, the film was shown as part of a session on the internment in the intro to Asian American studies course taught by Dr. Corinne Kodama of the Global Asian Studies Program at the University of Illinois at Chicago (UIC). Takehara Sensei was in attendance along with representatives of the filmmaking team. At one point, the students were polled of their previous knowledge of the internment, and only four of 30 students said the topic had been covered in high school. Three more such sessions at UIC are planned for October.

Then on September 30, Takehara Sensei accompanied the filmmakers to Los Angeles for a screening and panel at the Japanese American National Museum.

Thank you again to Takehara Sensei, producer Jason Matsumoto, and the team at Full Spectrum Features for keeping this important part of American history (and Takehara Sensei’s own life) alive and in the minds of people today.

On a side note, although not directly connected to Takehara Sensei, The Orange Story or Chicago Aikido Club, Alphawood Gallery in Chicago has been hosting an in-depth and informative exhibit on the internment. Titled Then They Came for Me, the exhibit includes extensive photos, artifacts, film footage and video testimonials. If interested, you have until November 19 to catch it.

Posted on October 4, 2017 by ChicagoAikidoClub

Request for assistance for Michi Dojo, an affiliate of our national organization Aikido Schools of Ueshiba (ASU). They are based in San Juan, Puerto Rico and suffered damage from the Hurricane. 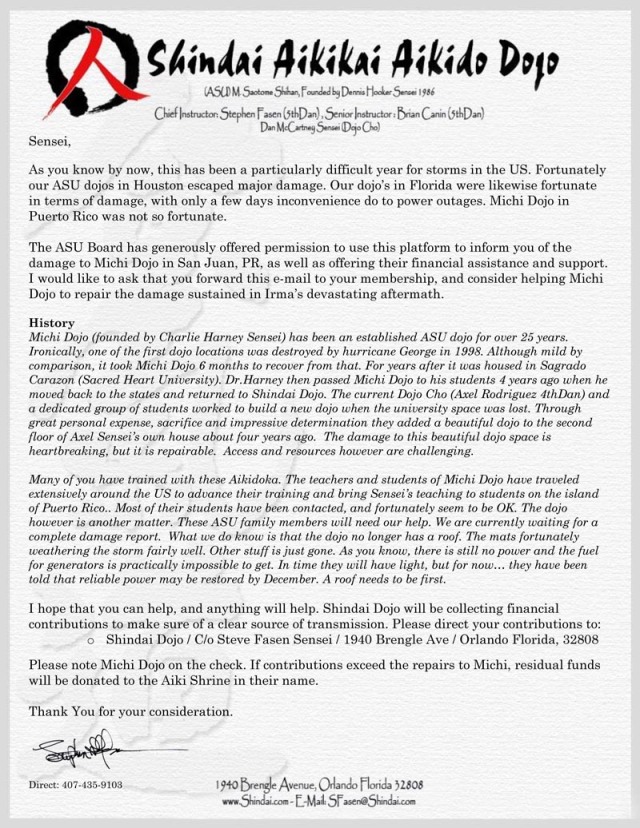 Posted on October 1, 2017 by ChicagoAikidoClub
Jason Shadday, friend of the club and former member of Chicago Aikikai, is hosting a series of workshops teaching the Feldenkrais Method of exercise therapy at his massage studio in Uptown.
Feldenkrais was devised by Moshé Feldenkrais (1904–1984) who applied knowledge gained from his study of physics, engineering, and martial arts (judo) to an intensive self-study of movement habits.
All sessions will be taught by Suzanne Thompson, founder of the Feldenkrais program at Columbia College, and head Feldenkrais instructor at Steppenwolf Theater.

Come to Your Senses (Feldenkrais Class)

Description: What is it about fall that makes us want to go back to class? It’s the human condition wanting to learn. Re-spark that brilliant brain that learned so easily when you were young. Join me as we explore our ribs and our breath, and maybe discover something new about our balance.

“Our Ribs: Cage or Carriage?”

(building entrance is on Lawrence Ave. right next to Starbucks)

Free 2 hour parking in the bank parking lot east of the building along the L tracks.

Our friend Erik Matsunaga, head instructor of  Ravenswood Shorin-ryu Karate Dojo and writer for the Japanese American online journal Discover Nikkei, recently shared with us this excerpt from a 1967 edition of the Chicago Tribune.

Dated August 27, it features a photo and caption of an Aikido demonstration by the old Illinois Aikido Club (Chicago’s first Aikido dojo, and starting point for instructors such as Joe Takehara and Mike Mamura) at the annual Ginza Holiday Festival at the Midwest Buddhist Temple.

The caption contains several interesting inaccuracies, referring to the dojo as “Aikido Club of Illinois,” and referring to the temple as “Midwest Buddhist church.” Plus the use of the term “Oriental”; now largely considered inaccurate and outdated.

Thanks Erik for providing us with this piece of local Aikido and Japanese American history.

Mushin Aikido Dojo in Batavia, IL will be hosting a two-day seminar with Bob Poresky Saturday, November 4 and Sunday, November 5.
Bob Poresky is the founder and chief instructor of Capital Aikikai of Syracuse.  Spanning over three and a half decades, he has an extensive and diverse involvement in martial arts.  He currently holds the rank of godan (5th degree blackbelt) and is certified as a shidoin (instructor) by Aikido Hombu (Headquarters) Dojo.  In addition, he holds a nanadan (7th degree black belt) as a shihan (master instructor) in karate, as well as black belt rankings in aikijujutsu and iaido.
Bob Poresky’s practice and teaching focus on traditional martial principles and philosophies, all aspects of self-defense, and self-development.  He sits on the Board of Governors of the Capital Aikikai Federation and is one of Clyde Takeguchi Shihan’s senior students.
Bob Poresky Aikido Seminar
Saturday, November 4 and Sunday, November 5.
Classes starting at 10:00 AM
Mushin Aikido Dojo
River West Family Fitness
Second Floor, 108 First St, Batavia, IL 60510
Phone: (630) 269-6818
E-mail: joe7neu@yahoo.com
Facebook event page: https://www.facebook.com/events/1867937516555322/
Directions
River West Family Fitness is at the Southwest corner of Shumway and First St., one block south of Wilson Street and two blocks east of Rt 31 in Batavia.  Parking is available on the north and east sides of the building.  Enter through the front door, north side of the building on First Street under the canopy.
Accommodations
Hotel information below.  Spaces available for sleeping bags on the mat.  Please call in advance if you have any special needs.  Refreshments, snacks and maps to local eateries will be available.  Dinner on Saturday night at the dojo will be a catered meat course with salads, potluck side dishes, desserts and beverages.  Bring your own food and drink of choice.  No donations needed (None refused).
A block of rooms are reserved at the Comfort Inn of Geneva.  Prices are $92/night for a double queen (two queen beds) or a king suite (a king bed and a twin couch).  Please mention“aikido” when booking.  Comfort Inn guarantees these rates until 10/1/2016.  After that date, they will honor the rate as rooms are available.
http://www.comfortinngeneva.com/contactus.asp
Comfort Inn & Suites of Geneva
1555 East Fabyan Parkway
Geneva, IL 60134
phone: 630 208 8811 fax: 630 208 7844
email: sales@comfortinngeneva.com
Posted in Community, Dojo News, Events, Japanese, martial arts, Seminars, Uncategorized | Tagged aikido, Batavia, Bob Poresky, Capital Aikikai, Clyde Takeguchi, Mushin Aikido Dojo, River West Family Fitness, seminar | Leave a comment

Posted on August 28, 2017 by ChicagoAikidoClub

The Chicago Aikikai (located at 1444 W. Chicago Avenue) is Chicago’s oldest dojo for the martial art of Aikido. It is the direct successor to the original Illinois Aikido Club, and is currently affiliated with the Aikido Schools of Ueshiba (ASU) and is under the instruction of Marsha Turner (6th dan).

Posted on July 25, 2017 by ChicagoAikidoClub

Hapkido: Korean Art of Self-Defense by Scott Shaw My rating: 4 of 5 stars Amazon page When I picked up this book, all I knew about Hapkidō was that it was a Korean martial art, that it wasn’t a sport like its more famous martial cousin—Tae Kwon Do (TKD), and that it was a […]